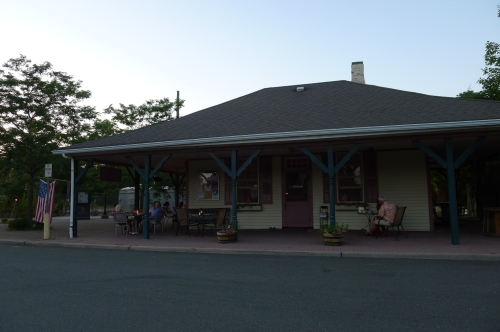 I stumbled upon this adorable historic station house converted to a restaurant in Speonk, Long Island, while picking my husband up from the train station. After looking at the menu and reading that they used local ingredients, we decided to stop and have dinner. I was pleasantly surprised by how good it was!

They are only open for dinner on Thursday and Friday nights with a special prix fixe menu. The rest of the time they are open for breakfast and lunch only. I started with spanakopita and tzatziki sauce, followed by a salad with blue cheese and a main course of roast Long Island duck with lingonberry sauce and wild rice, all of which were delicious. I wanted to stay for desert and try one of their homemade pies but it was getting late and Olivia wouldn’t allow it. The setting was beautiful with tables both inside and outside, lit only by candlelight and there was the occasional train passing by. It felt as if not much had changed since it was first built in the late 1800’s and reminded me of the cafe from the film I loved as a child, Fried Green Tomatoes. The owner was very friendly and sat next to us explaining the history of the station house. He was a cool guy with good taste who obviously had a love for old things and drove a vintage car. It is my dream to open a cafe like his.

I went back a few days later for breakfast after checking out their Facebook page to try their eggs from their own hens and homemade English muffins but was disappointed to find that they were ‘out of’ both. I settled for a banana bread pudding/French toast which was good but probably made from conventional bread, as it appeared the breakfast menu items mostly were. I didn’t ask as I didn’t want to stress myself out after having already eaten it. If only all of their food was local and organic. I will definitely, however, return for dinner someday. 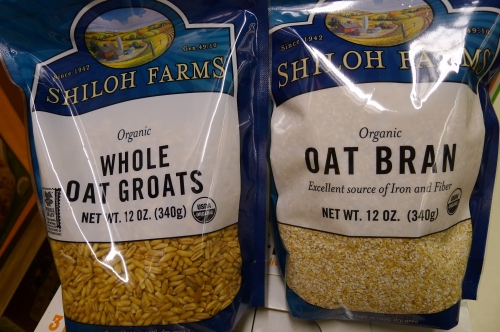 I was excited to buy these whole oat groats with the intention to sprout them to neutralize some of the phytic acid. I assumed that if they were whole and from a good small farm brand like Shiloh Farms they must not be heat treated, after having learned that most commercial oats are heat treated to preserve shelf life and therefore will not sprout. I was wrong! I called the company to ask and they were in fact heat treated. I did more research on phytates in grains and discovered that rolled oats are the lowest in phytates because rolling removes part of the bran which has the highest amount of phytic acid.

The subject of phytates is complicated and I am still not sure how healthy it is to eat any grains at all, so I only eat them on occasion. It is also very time consuming to soak the grains overnight or longer, or to sprout them and not worth it if only part of the phytic acid gets removed. For now I will stick to the sprouted oats I’ve been using by Living Nature, which I like because I can decide in the morning if I want to have oatmeal instead of having to plan a day in advance. I also don’t like the sour taste that soaking in water with yoghurt gives the oats. I used to boil my previously soaked oats in water and then add butter but it is much tastier to boil the sprouted ones in whole, grass-fed, pasteurized, unhomogenized milk, which is one of the rare exceptions when I use pasteurized milk, as the enzymes already get destroyed through the cooking process.