I found this hidden gem while washing my car at the Texaco gas station in Miami Beach. I was surprised to the see that the old pseudo-healthy sandwich and juice bar that I was used to seeing, had been replaced with a truly natural, fresh, made from scratch on the spot, nut milkshake bar. In an ice bucket on the counter there was a selection of different types of nut milk: cashew, almond and coconut, in old-fashioned glass milk bottles. Being so jaded from all of the false health food marketing, I was expecting to find an artificial ingredient to ruin it all but was amazed that the milk is made of all natural ingredients and am impressed that they use glass bottles so the milk doesn’t get contaminated with toxic plastic. This is the first time I have seen glass bottles used in a juice bar in Miami. Jugo Fresh, Glaser Farms, Athens Juice Bar and CPR all use plastic bottles for their juices and milks; even Organic Avenue in New York City replaced their glass bottles with biodegradable plastic ones. There is a five dollar bottle deposit to encourage reuse (and of course refill). I ordered a bottle of coconut milk and watched as the mature coconut (from Miami’s hip new coconut company, Coconut Cartel which also supplies their branded coconuts to Soho Beach House and The Standard Spa), was cracked open, separated from its shell and added to a Vitamix blender along with hot filtered water used to extract the coconut milk, Medjool dates, pure maple syrup, vanilla and Himalayan pink salt. The result was a heavenly tasting, fresh, nutritious milk full of healthy fat from the mature coconut. 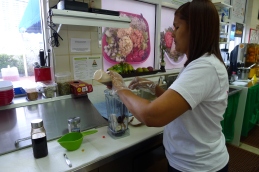 Opened less than two months ago, owners Mario Suarez, Sara Tacher-Suarez and Brittany Fierman started Milk Gone Nuts with a vision to create an old-fashioned milkshake bar with a twist—dairy-free. Sara started making her own nut milks for herself and later her family and friends. When she decided to open her nut milk bar after being encouraged by friends, her daughter Brittany quit her corporate job to help run the business. The three types of nut milk can be ordered by the glass or bottle and made into a variety of milkshake flavours such as green apple and fig or homemade peanut butter and cacao, with different toppings including superfoods like maca, goji berries and chia seeds. Their sister company, Organic Juice Bar, at the same location, makes salads, wraps, pita sandwiches and juices using certified organic fruits and vegetables. Their salad dressings and extras are not natural (and may contain GMOs, e.g. soy, chicken) but along with expanding to more locations, their goal is to become fully organic. 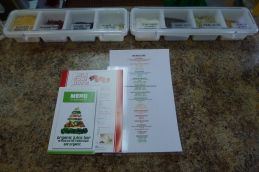 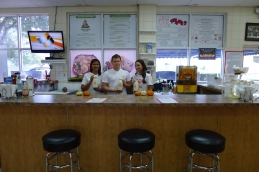 I never expected to find a real food spot in such an unlikely place and I have no doubt, with a unique idea and the only nut milkshake bar that exists, Milk Gone Nuts will become a huge success. Getting my car washed is something I rarely have time for, but now that I can feed my toddler a healthy treat on our way home (saving me the time of making lunch) I will be stopping here more often. 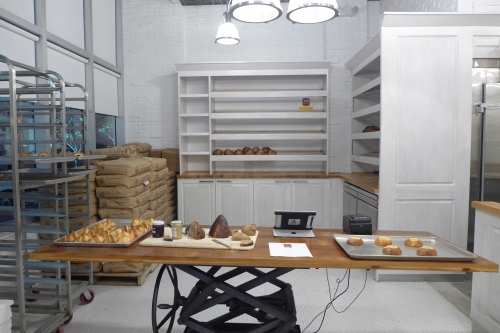 Walking back from Jugo Fresh, I came across this bakery which had been opened just three days. I was drawn inside after seeing a stack of bags of organic King Arthur Flour in the window. The owner, Tomas, was giving away samples of his cherry pecan bread with made to order peanut butter by Big Spoon Roasters. It was delicious and I could really taste the difference compared to the bleached, bromated flour of conventional bread, of which after being on a real food diet I can taste the bleach. Tomas told me his breads are all naturally leavened sourdough breads and that he uses organic flour, making True Loaf Bakery the only organic bakery in Miami (Zak the Baker who also uses organic flour and natural leaven, will soon be opening a shop in Wynwood). His breads include walnut, whole wheat, country loaf, multi grain, whole wheat with flax, sunflower and cherry pecan. Sourdough leavening is the traditional practice of preparing grains which removes the phytates and enzyme inhibitors, making them more nutritious and digestible.

True Loaf Bakery also makes croissants, chocolate croissants, ham and cheese croissants, madeleines and brioche with pastry cream and creme fraiche, however, a conventional butter is used for these, Plugra, which is made from cows that are treated with rBST hormones and fed GMO soy and corn, so I wouldn’t recommend them if you’re on a real food diet. Although True Loaf Bakery isn’t one hundred percent organic it is hopeful to see traditional food shops like this one opening in Miami and perhaps this will be the start of many more.

True Loaf Bakery is so new there isn’t yet a listing for it or a website. It is located at 1894 Bay Road in Miami Beach. 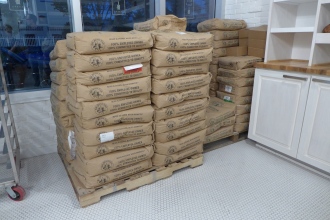 I have yet again been the victim of false health food marketing. With genetically modified foods permeating the U.S. food supply, it is nearly impossible to avoid it. Countless times I have eaten what I thought was real food only to have been fooled, along with the majority of Americans today. The saddest part is that, although GMO labelling campaigns are educating millions, most Americans still don’t even know what GMO food is. I always feel sorry for the people who go to Wholefoods for dinner thinking they are being healthy, because Wholefoods supposedly sells only ‘whole’ food, when in reality nearly every single item at the hot bar contains at least one GMO ingredient, usually in the form of canola oil. I’ll never forget the time I fed my then one year old daughter half a papaya and watched her proudly as she made her way through it all, only to see after the fact, that the sticker on it read ‘Hawaii’. Papayas from Hawaii are genetically modified. I called the company to confirm and sure enough, it was. Or there was the time I ate GMO grits at Yardbird, thinking that because it was stone-ground from a specialty company, Adluh, it must be organic. Then there was the summer I drove for miles every other day to buy raw milk from a dairy farm in Bridgehampton, Long Island, who raise Jersey cows on pasture. After an entire summer of feeding the milk to my baby and making yoghurt and kefir from it, I found out after seeing soybeans on the ground of their barn, that the cows are fed GMO soybeans while being milked, twice a day.

As there are so many genetically engineered foods to remember to avoid, and with more increasing, still unlabelled, it gets confusing and sometimes even a person like myself who I consider to be well educated on the subject, forgets. Or I naively trust the waiter of a restaurant or the owner of a store who claims the food I am eating is organic. Now I am more cynical after being fooled one too many times and realise that you literally have to go to the farm yourself to believe it. My latest incident involved eating meat (and feeding it to my daughter) from a specialty store in Miami who market it as being grass-fed, not only on their menu but also when I called and asked. They claim their pork is from a small family farm whose free-range pigs are fed a diet of apples, carrots and acorns; and their beef comes from cows fed grass and supplemented with sugar cane and orange peel. This sounds idyllic but it is not the case. I discover after calling the pork farm, which is not one farm but a network of farms, that the animals are fed a GMO grain-based diet. The same goes for the beef farm. The  moral of the story is, if you want to avoid eating genetically modified foods or feeding it to your family, buy certified organic or non-gmo certified products, learn about which foods to avoid and never believe what the waiter of a restaurant/owner of a food store, tells you. Find out what farm the food comes from, call the farm yourself and ask what diet the animals are fed or call the company of a food product and ask whether they use genetically modified ingredients.

Below are some resources for learning about GMO foods:

http://geneticroulettemovie.com (There is a free screening of the movie this week only—highly recommended) 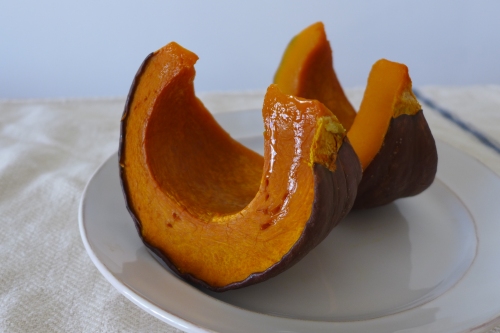 I improvised this recipe, originally with some leftover barbecued sweet potatoes. This time I tried it with pumpkin and it turned out deliciously, like pumpkin pie, perfect for the season. It is very nutritious and a great snack. It can also be done with winter squash.

Mix together in a blender and drink!