by Daniela, The Real Foodie

Over the years that I have been coming to Southampton there has always been a lousy selection of restaurants to choose from, none of which serve real food. It was always my dream to open my own health cafe in this town as it is in such dire need of a healthy place to grab a quick lunch or take out; and it would probably make a fortune due to the increasing crowds that come here each summer. In my former less healthy days I used to get sandwiches at the local delis but there was never anywhere to get a delicious organic salad, which even then I craved. Of the more formal restaurants that we would go to have dinner, Sant Ambroeus, Red Bar, Savanna’s and more recently, Tuto Il Giorni were a step above the local burger or seafood joints; Sant Ambroeus serving tasty Italian panini during the day, but all of them still using conventional ingredients. There used to be an organic market and cafe called Annie‘s but it didn’t last more than one summer. Then came Organic Avenue selling raw vegan snacks, pressed organic juices and smoothies but they also shut down after a couple of years, this year selling just a few juices inside the clothing store Theory.

Now finally the world is catching onto real food and there are a few farm-to-table restaurants that have opened in the past year in and around the Hamptons. There is also a new organic pressed juice bar in Southampton which opened this summer called Juice Press and a restaurant on the highway, Cafe Crust, which sells grass fed burgers, hormone free pizzas and organic salads. My husband and I decided to give one of the farm-to-table restaurants, Station, in East Quogue a try and we were surprisingly impressed. The outside is beautifully landscaped with wild flowers. The food is delicious, simple, healthy and a perfect example of farm-to-table. Opened during Memorial day weekend, everything served is either grown or landed locally. They work with local farms, including Invincible Summer Farms, Early Girl Farm and Mecox Bay Dairy. We have gone back several times since. Now we finally have a restaurant that we can keep going back to and feel good after. 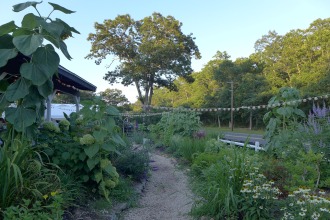 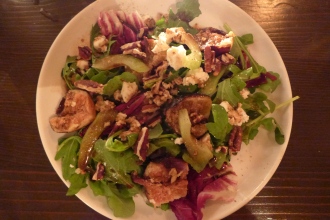 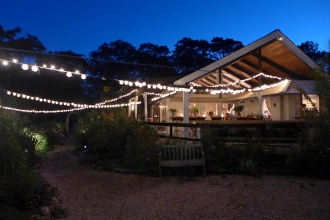